Hi-Ho Silver: The History Of Silver

Some metals found early popularity primarily because of their appearance.  Silver is one such metal.  Relatively scarce – but not too scarce – so that it was considered valuable, silver has been an important form of currency, jewelry, and decorative pieces for thousands of years.  Only as industry has understood the other interesting and powerful qualities of silver in the last couple of hundred years has the metal grown beyond the beautiful.

The first confirmed formal mining of silver can be traced back to Turkey around 3000 BC.  More extensive mining through the Mediterranean areas to Spain and then other regions of what is modern Europe expanded its use as a trading commodity. Larger deposits of silver were developed once the Americas were “discovered”.  Central and South America became major sources of silver through the 1600’s and 1700’s.  Even today, five of the ten largest silver mines in the world are in Mexico, Bolivia, and Peru.  China, Russia, and Australia are now significant producers of silver; only about 7% of the world’s silver is produced in the US and Canada. 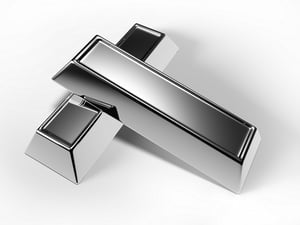 Much of the accessible high grade ore was found and recovered by the end of the 1800’s.  Some areas, often those around hydrothermal activity, still support direct mining, but today most of the silver is recovered as a (more valuable) bi-product of mining for other minerals. When mining for copper or lead, for example, the minor silver content can have more value within the ore than the primary metal.  Silver is selling for more than $16 per ounce today, while lead or copper are at a dollar or two per pound, so silver is greater than 100x more valuable.

Before the mid-60’s, US coins were made up of about 90% silver.  Today, the dime, quarter, and half-dollar contain 8.33% nickel and the balance copper - but no silver.  (As an aside, pennies are 97.5% zinc, and nickels 75% copper).  With the higher relative value of silver, then, older coins are worth much more dead than alive.  Visit one of the “melt value of coins” websites and you will see that the metal value of the old silver coins is about 12x the face value of the coin.  That candy bar from the vending machine may have been a lot more expensive than you thought.

The real driver for today’s ongoing effort to retrieve silver is its use in industrial applications, which account for the majority of its consumption.  Now understood as a material that helps kill bacteria by discouraging respiration, silver has played a major role in medicine for a long time.  Silver on surfaces in hospitals helps prevent infection and kill bacteria.  Exposure to or consumption of large amounts can cause problems, but in the right dosage, silver is valuable to fight infection.

As one of the best metallic thermal and electrical conductors around, silver’s place in electronics is indispensable.  Switches and contacts are a visible use, but it is also widely deployed in LED’s and often as a thin layer on Compact Discs. Silver in photovoltaic cells captures and transfers electrical current.  It is used to reflect the sunlight in concentrated solar energy production. Silver is a catalyst used in certain petrochemical processes.  Very thin coatings of silver are sometimes applied to food packages and water treatment systems because of its anti-bacterial qualities, and it has long be used in the photographic industry.

What began as the material of shiny trinkets, has become an essential component of industrial applications in many areas.  Its appearance and attractiveness in traditional uses, though, is not diminished.