Nickel: Where Does It Come From?

But where does nickel come from?  Most materials don’t just “appear” but, in a way, some of the nickel on earth has done just that.  Meteorites typically contain from 5 – 30% nickel.  So if you notice a rock that just “appeared” in your back yard last night, it may be nickel in the form of a meteorite.

Nickel typically occurs naturally in an impure form as ore.  It must be mined, extracted and refined.  It is mined in a couple of dozen countries around the world, the most prolific of which include Russia,   Australia, Indonesia, and Canada.  Back to the “appearance” of nickel, there are some who think that the large deposit of nickel in the Sudbury region of Canada is the result of an ancient meteor collision.

The gathering up of meteorites is not a very practical way to supply the world’s needs – some one to two million tons of primary nickel per year – so traditional mining techniques including open pit and  underground are used to gather the nickel -containing ore.  The ore would typically consist of up to 3% nickel, and often exists naturally as either hydrous nickel silicates or nickel-iron sulfides.  The valuable nickel content must be separated from the worthless material around it using a combination of mechanical and metallurgical techniques. 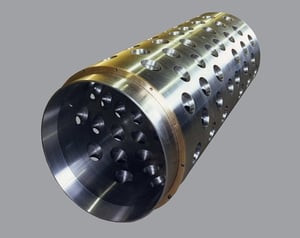 The ore is crushed and ground.  Using modern hydro-metallurgical techniques, the ore may be mixed with water. The addition of air bubbles  promotes the flotation of the desirable metal materials to the top where it can be recovered.  Additional high temperature pyro-metallurgical processes may be applied to refine the metal. The material will go through a number of additional refining steps to increase purity; those will be the topic of a future TekBulletin.

Much of the earth’s nickel is believed to be concentrated in our planet’s core. Nickel is also one of the most highly recycled metals. As about 60% of the nickel in the world ends up as a component of stainless steel, the recycling of stainless steel is the most common way that nickel is recycled.

Incidentally, those nickels in your pocket are only about 25% nickel; the balance is copper.