What Makes It Stainless?

It’s everywhere. Probably more than you notice. It’s a key material in food preparation and food processing equipment. When you are eating, that fork in your hand is probably made of it. It is likely to be the material your sink is made of. And if you watch HGTV you know that no kitchen is complete unless it has appliances made of it. It’s a key component in many industrial applications. We are talking about stainless steel, but it’s probably so familiar that you just refer to it as your old friend, “Stainless”. 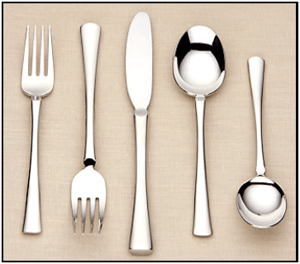 But just what makes this popular material “Stainless” and what does that mean?

Stainless steel is a ferrous (iron-based) alloy family that has a minimum of 10.5% chromium.  It has been known for a couple of centuries that adding chromium to a ferrous alloy really improves the material’s resistance to corrosion.  But it has only been in the last century or so that a better understanding of the metallurgy of that combination – more specifically the controlled inclusion of very small amounts of carbon – has allowed stainless steel to become the workhorse family of metals that it is.

When exposed to oxygen, the chromium in the stainless alloy instantly forms a very thin, highly protective film of chromium oxide.  This film does not let oxygen penetrate further into the base metal, which prevents further oxidation.  No oxidation, no rust.  Or more conversationally, no stain.  The metal is not really “stain-less” per se, but rather, the existence and regeneration of the chromium oxide film prevents the base iron metal from rusting, and appearing discolored.

Significantly, this film-creating process, called  passivation, is also self -repairing.  That means that if the material is scratched, the protective film quickly regenerates itself, as long as it is in the presence of oxygen.  The protective layer is restored.  Unlike coatings or cladding, which compromise the protection of the base material if damaged, stainless heals itself.

But the stainless material must be in the presence of oxygen for the passivation to occur.  Some stainless material operates in conditions where free oxygen is absent – underwater, for example, or between mating parts.  Components that are damaged or subject to wear or acid in these environments are susceptible to certain types of corrosion or galling. 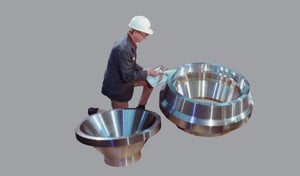 There are some stainless alloys that will rust, particularly those grades that do not contain an appreciable amount of Nickel.  It’s best to check with your metallurgists and consider the environment and performance demands when making a material selection.  All stainless is not the same.

Back to that fork for a moment.  Humans need a certain small amount of chromium in the diet.  It plays a role in how insulin regulates the body’s blood sugar levels.  We are not suggesting that you chomp down on your stainless fork to get extra chromium, but it is a nice side-benefit of having that piece of pie.  Stainless steel is good for you – and don’t forget the iron that is in your stainless fork, too!